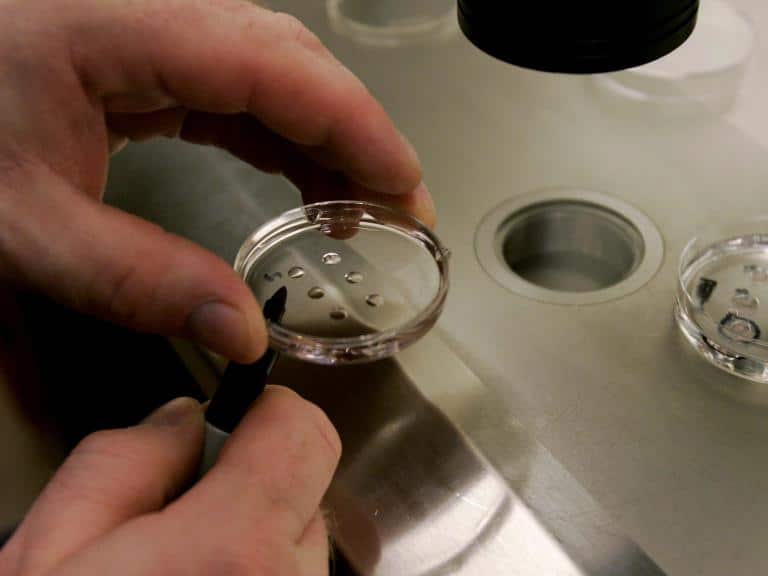 The Progress Educational Trust (PET) symposium event ‘Revolutionising Reproduction: The Future of Fertility Treatment’ took place at the Royal College of Physicians of Edinburgh on the 19 March 2019.

The symposium focused on recent changes in reproductive medicine and embryo research, asking where the rapidly moving boundaries in this field are taking us. The symposium had two parts: ‘Creating  Eggs and Sperm Outside the Body’, focused on key scientific developments, while ‘From Genome Editing to Womb Transplants’, explored the future of these groundbreaking techniques.

The first session was chaired by Professor Scott Nelson of the University of Glasgow whose introduction highlighted the importance of providing hope for patients who have lost their fertility and praised the innovation in fertility treatment taking place across Scotland.

The first speaker was Evelyn Telfer, professor of reproductive biology at the University of Edinburgh. She spoke of the problem that women face of being born with a fixed number of immature eggs of which only 0.1 percent will successfully ovulate and potentially undergo fertilisation.

Richard Anderson, professor of clinical reproductive science and head of obstetrics and gynaecology at the University of Edinburgh’s Centre for Reproductive Health began his talk by discussing the need for broadening opportunities in fertility preservation. As an alternative to egg freezing, he introduced the concept of freezing ovarian tissue, explaining that it has potential advantages, not only in providing patients the chance to have genetically related children, but the tissue can also restore patients’ ability to produce hormones. Recent studies in mice have shown the success of using female germline stem cells from postnatal ovaries, which could be used to restore ovary function in menopausal women or help women with other fertility issues.

The final talk of the session focused on fertility preservation in males, and was given by Dr Rod Mitchell, research group leader at the University of Edinburgh’s Centre for Reproductive Health. Dr Mitchell explained that fertility in men requires the constant production of sperm, and that sperm freezing is not possible for males who have not undergone puberty, such as childhood cancer patients.

The talk centered around Dr Mitchell’s research program storing spermatogonial stem cells of boys under the age of 16 with a high risk of infertility. These tissues could be cultured for sperm generation, or transplanted back into patients to restore fertility in adulthood. This research has been successful in mice models.

Dr Mitchell also discussed the potential that stem cells created by reprogramming cells from other body tissues may be encouraged to produce germ cells which could be then transplanted into the testes. He ended his talk with the statement that fertility preservation must encompass us all and we should not ‘leave the boys behind’.

The audience was then invited to ask questions, focusing on applications and development of these fertility techniques. Discussion followed on whether fertility preservation can be a burden on child patients, with worries about the lack of counselling provided. Professor Telfer emphasised that fertility preservation is to make sure that all options remain open for the patient, and Dr Mitchell added that counselling available to young cancer patients is inconsistent and that they should receive ongoing support.

There was also great interest in how young trans people may feel about preserving gametes or gonadal tissues associated with their dysphoric gender. Professor Anderson suggested that as this is a growing area it must be improved and discussed how fertility treatment at this time can lead to difficult decisions for people who have been going through challenging times.

The second session of the symposium was chaired by Professor Anderson and continued the theme on the future of fertility, discussing applications of germline genome editing in humans and animals, as well as the future of womb transplantations.

The first speaker of the afternoon session was Dr Norah Fogarty, a researcher at the Crick Institute working closely with Dr Kathy Niakan, the first researcher licensed by the HFEA to use the CRISPR/Cas9 genome editing technique on human embryos. She presented the group’s work understanding gene function in the earliest stages of embryo development.

Dr Fogarty and Dr Niakan studied loss of function of OCT4, a gene known to be important in embryogenesis, and compared results in human and mouse embryos. Surprisingly, knockout of the OCT4 gene was found to have a much more significant effect in human embryos –  only embryos where some cells still carried OCT4 were able to form a blastocyst.  Dr Forgarty discussed how these results demonstrated that CRISPR/Cas9 is an essential tool to study human gene function as it is not always possible to rely on mouse models.

The second speaker was Bruce Whitelaw, professor of animal biotechnology and deputy director at the University of Edinburgh’s Roslin Institute. His talk centered on the use of selective breeding to select genetically elite animals and how changes in technology have meant that probability-based algorithms can now be used to select genetic markers for desired characteristics in livestock. He went on to present how CRISPR/Cas9 could be used to improve productivity in agriculture, and also protect livestock such as pigs from viruses including Porcine Reproductive and Respiratory Syndrome (PPRS) which costs Europe €1.5 billion annually. Although regulation of this technique in animals could raise many challenges, he concluded that as the ‘genie is out of the bottle’ we should and must regulate it.

The final speaker of the afternoon symposium was Richard Smith, a pioneer in fertility-preserving surgery and currently the clinical lead and leader of the research team at Womb Transplant UK. There are 50,000 women in the UK with absolute uterine factor infertility who currently can only have children through adoption or surrogacy. A uterus transplant could allow these women to carry their own genetically related child.

Smith discussed the history of uterine transplants and the turning point for the technique in Sweden in 2012, where multiple donations to multiple recipients were successful and led to eight healthy babies being born. Since this study 56 transplants have taken place worldwide leading to 14 live births, and the operation time for live donation has rapidly decreased. He concluded his talk by addressing the regulatory barriers that have to be surmounted before the procedure can be trialled in the UK.

The floor was then opened for questions and there was a great interest in how the public and media reacted to the Crick laboratories research of the OTC4 gene using CRISPR/Cas9. Dr Fogarty said that the team was very encouraged by the positive reception of their research, which reflected the UK’s strong history in being at the forefront of research innovation.

Finally, a member of the audience inquired about how regulation of genome edited livestock might work in the UK. Professor Whitelaw explained that countries such as Canada and Japan are moving quickly with regulation, compared to EU countries which are bound by the Court of Justice of the European Union ruling that animals with edited genomes must be regulated under the existing GMO directive.

The symposium was an informative and interesting afternoon on a range of technologies and applications that will revolutionise the future of reproduction. These raise scientific and social questions which deserve great attention over the coming years.

PET is grateful to the Scottish Government for supporting this event.

Fertility takes up to eight months to return after stopping contraception

Lessons from Lockdown: How to Improve Support for Fertility Patients