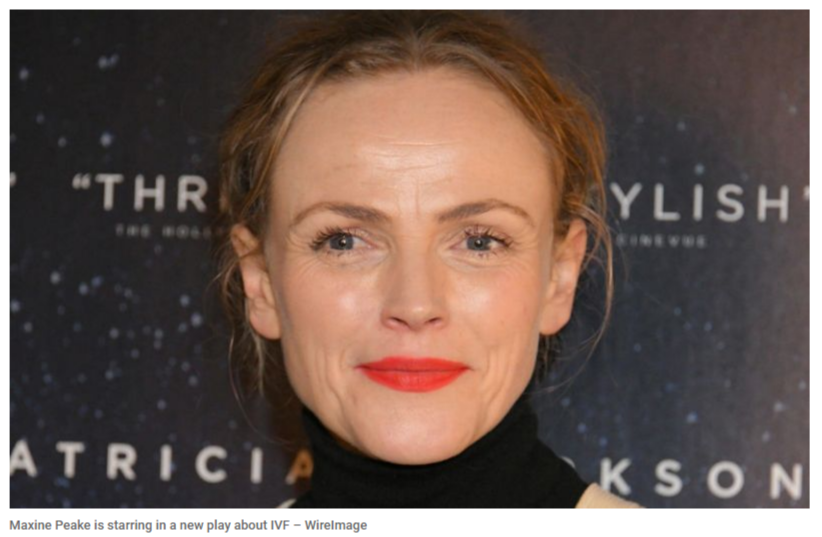 Maxine Peake has revealed she was refused a day off work for the final stage of her IVF treatment.

The actress spoke out about trying to have a baby on BBC Radio 4’s Today programme today while discussing her upcoming play about the fertility treatment.

Peake, 44, who has wanted to start a family with her long-term partner Pawlo Wintoniuk for many years, has undergone three rounds of IVF and suffered two miscarriages.

The Silk and Dinnerladies star revealed that a production company she previously worked for told her she couldn’t stop filming for one day so embryos could be implanted into her womb.

She told the programme:

“I was fortunate – I had my treatment on the wonderful NHS and had three rounds but that was enough for me, I was done. It was so difficult physically and emotionally. You are absolutely pumped full of hormones, you’re tired, and I was working at the same time.

“You don’t have that luxury of taking time off. You have to find places where you can inject when you’re on a night shoot. In a grubby portable toilet, panicking that you’re going to infect yourself. It’s the process of planning it out and of not wanting everyone to know what you’re doing.

“I remember trying to ask for time off – I needed a day off for the transfer – and the production company I was working with weren’t very forthcoming. When I eventually told them what it was for they were like ‘we don’t know whether we can let you off that day’. So you’ve got all that stress and panic.”

‘Transfer’ is the final stage of the IVF process and is seen as one of the most stressful times of the treatment as the woman will know just two weeks later whether it has been successful.

Peake said she feared that playing a woman struggling with IVF in her latest play, Avalanche, could “throw things up” she had to come to terms with in the past.

The production, written by Julia Leigh, will be staged at the Barbican Theatre next month.

Ms Leigh said she wanted to provide a “shared aloneness” to anyone touched by the “complicated world of IVF”.